We are currently experiencing higher than normal call volume and apologize for any delays students may experience. If you are ready self-enroll for the Spring semester, please visit the online student center at my.maricopa.edu

Building connections and breaking down stereotypes – those themes are the basis for the Human Library, a global award-winning campaign to increase understanding and end violence. 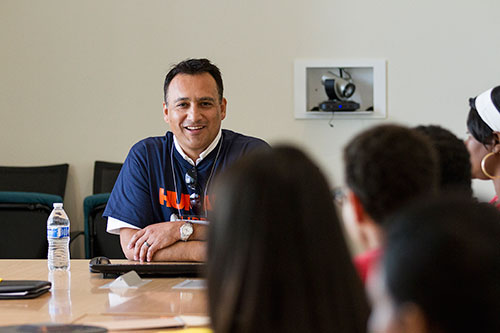 The Human Library started at GateWay Community College in 2014 after three GateWay librarians observed the event at Glendale Community College. Now in its third year, the Human Library event at GateWay on April 11 will bring together students, faculty and community members to share stories and gain understanding into the lives of individuals who have been stereotyped.

Beth Malapanes, GateWay Library Faculty and one of the organizers of the event, said the Human Library creates an invaluable connection between groups who may not understand or know anything about each other.

“Our point is that we have to talk about race, religion and the things that make us different, because that’s what makes us special,” she said.

The Human Library brings together individuals from all over the community, called books, to share their personal experiences with stereotypes, prejudice and injustice. The audience, called readers, listens intently and ask questions.

Each book sits with three to four students around a table, while “best sellers” engage with audiences of 20 to 40 people.

The April 11 event will feature two sessions, one at 9:30 a.m. and the other at 11 a.m., both in the Copper Room. At the end of each session, attendees will be asked to evaluate their experience.

“The impact it has is that it really opens up our students’ eyes to things that they didn’t understand about groups of people, about themselves, about the way they talk about people,” Malapanes said.

The learning process is not just for the readers. In fact, the books themselves often learn new information or perspectives.

One year, a police officer told his story as a book to a group that included many refugee students. Through the discussion, the officer learned that refugees generally don’t trust police officers.

“In their countries, the police aren’t usually someone they go to for help,” Malapanes said. “They usually run the other way if they see police.”

Surveys were conducted in prior years, which found that students learned from the event and had more positive opinions about the stereotypes each book represented.

GateWay earned two awards for its execution of the event, the Diversity Advisory Council Award of Excellence and the John & Suanne Roueche Excellence Award for Innovation in the Community Colleges.