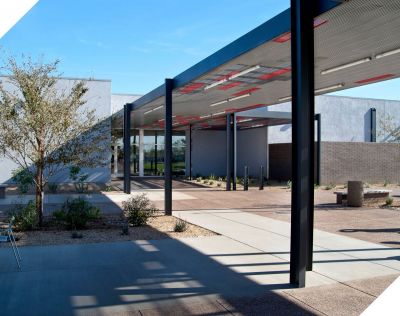 Due to shrinking appropriations from the state since 2007, more aggressive, intentional actions have taken place to bring the two institutions more in line with one another.

“We had worked in silos and as separate institutions for many years, but have made a concerted effort to move away from that model,” says Steven Gonzales, president of GateWay. “We have taken it a step further, moving from two separate institutions to operating and functioning as one, under one brand, with three locations and two extended sites.”

With several initiatives under the One Maricopa effort led by the Governing Board and Chancellor, it’s an ideal time to bring the two brands under one.

“Our Trade and Technical Training will benefit from a clearer alignment with GateWay, and we expect to gain more efficiencies for both institutions under one brand,” says Al Larson, vice president of Workforce Innovation and Strategic Partnerships. “It will also allow us to help students find the right fit, whether it’s a short-term, hands-on training program, a program that will help them transfer to a university or an occupational program.”

All of the current MSC and GateWay programs will continue to exist, with the MSC programs available under a new educational category known as Trade and Technical Training, which is part of the umbrella functional area called Workforce Innovation and Strategic Partnerships led by Larson.

“The long-term vision for GateWay in three locations means that students can go to any one of our four campuses and register for university transfer, occupational education, or trade and technical training programs,” says Gonzales. “That currently is not an option.”

In addition, organizational alignment changes in Academic Affairs, Student Affairs, and under Workforce Innovation and Strategic Partnerships are in process, with many already effective as of January 2016.

Training will be offered to employees to be able to navigate and understand new processes and systems from both institutions, answer questions about the changes as well as develop consistent processes for the July rollout.

During the spring, efforts will be under way to further educate and communicate these changes to employees across the district, our elected officials, community partners as well as the general public.

All changes required the college’s accrediting agency, the Higher Learning Commission, which it received during the summer.