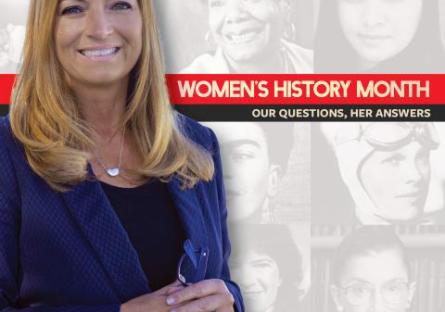 March is recognized as the time we reflect on the historical journey of women globally. In this article, Dr. Diaz shares her thoughts on Women’s History Month and a little about her own journey and the women who have shaped and influenced her along the way.

Q) As a female leader, what does Women's History Month mean to you?

Women's History Month is a focused time of the year to officially and intentionally celebrate past and current women who have contributed to the lives of women and men.  Those recognized can be women who we all know (e.g., Oprah Winfrey) or women from our personal lives (e.g., moms, grandmothers, mentors, etc.). However, while I appreciate the focused attention during the month of March for heightened awareness and celebration, I believe we can and should recognize and celebrate special women in our lives at any time of the year.

Q) Since you were born, was there a point in history or an experience that really stood out that has impacted your life as a woman?

There are two significant events that have occurred in the US since I've been alive that have had an impact on me as a woman.

First, in 1986 the Space Shuttle Challenger included the first American civilian to join the flight as an astronaut.  Her name was Christa McAuliffe and she was a high school teacher. I was studying at the University of Iowa to become a high school math teacher at the time of the explosion. I remember feeling an overwhelming sadness to know that she was a teacher, the first female civilian to go into space and that she died during that flight. It symbolized for me what leadership and risk-taking for the sake of learning and advancing our country and our world looked like. I also remember wondering how her family and students would move forward after such a public and tragic event.

The second experience occurred in 2011 here in Arizona.  It was the shooting of then US Representative Gabrielle (Gabby) Giffords. I lived in Illinois then, however, I remember thinking how senseless the shooting was, yet how brave Gabby was to serve the public in a fearless manner.

Both of these events are about women who led the way for others and were inspiring to people whom they didn't even know. Both of them experienced public tragedy, witnessed through the media, yet I felt connected to both of these women. One through my similar career choice and the other through public service.

Q) Women have accomplished so much as a gender, but more can always be done. Is there anything that you would like to see continue to improve/change for women?

The biggest issue to me is equal pay for equal work. While there has been legislation passed and advocacy work completed, there still exists a significant difference in the wages for women as compared to men across our nation in the same or similar jobs. If you dig deeper into this issue and disaggregate data by race/ethnicity, you will find that women of color make even less than white women who make less than men.  This is a huge inequity that must be continually addressed through hiring and compensation practices at the local and national levels.

Q) Growing up, do you remember the first female local or federal politician that may have been running or was elected? If so, do you remember what you were thinking at the time; do you still remember her name?

Yes, her name was Lynn Martin.  She ran for the Winnebago County Board and was elected in the late 1980s. She also was a teacher in the Rockford Public Schools at the time. In the early 1990s she served in the Illinois House of Representatives and then the Senate. She also served as the 21st US Secretary of Labor under George H. W. Bush. I remember seeing her a few times around town and thinking how powerful and strong she seemed. Yet, she had a very warm demeanor. She was known for being an advocate to cut unnecessary government spending, which was admirable to me, and also likely very difficult for her given her position and gender in a male-dominated field.

Q) Who is or has been an influential woman in your life and why?

It's my mother, Diane Forberg.  She has always been my biggest supporter and cheerleader.  She and my father valued education and made sacrifices to send me and my brother to a private high school where we got the best education in the city at that time.  She also asked us "where do you want to go to college after high school?" which was a given to her.  Our parents made sure that my brother and I each completed a bachelor's degree debt free.  Because I have worked in education my entire professional career, I cannot imagine what my life would be like if I hadn't gone to college.

Q) How do you or would you like to personally impact future generations of women?

Q) What is an important lesson you would share with women or the next generation of women?

We need to support one another and stop being hyper-competitive and cruel to one another.  We need to stand up for and intervene on each other's behalf when we see something negative happening to a female peer. Use your voice and your perspective to make necessary changes, and don't settle for anything less than you're willing to settle for.